In our last post, we introduced the concept of reversible bonding, and explained how thermoplastic adhesives could only be effective in today’s cars if there were a lightning-quick method to heat up the adhesive, form a strong bond, and cool the joint and material in under a minute.

Today, this has become a reality thanks to researchers at Michigan State University. They created a thermoplastic adhesive material that contains ferromagnetic nanoparticles: iron ball-bearings bigger than atoms, but smaller than we imagine. The iron particles INSIDE the adhesive vibrate with alternating electric magnetism under AC current and become very hot, very quickly melting the adhesive thermoplastic. Before the adjacent material heats up, the adhesive is bonding. 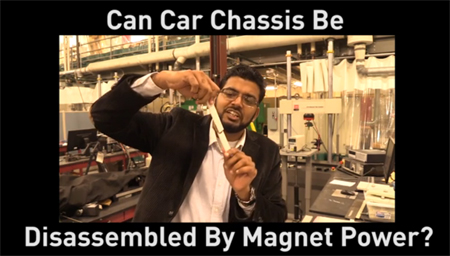 Researchers chose spherical shapes because spheres have more surface area than other shapes, so they heat up faster; plus, spheres make cracks travel around the curved shape so spheres deter crack propagation. It’s harder for cracks to grow all the way around a curved object than along a flat particle’s edge. Multiply that idea by a million nano-pieces.

The adhesive process works like this: Think about induction ranges used in those modern kitchen stoves. These ranges work by electromagnetic induction. A created electromagnetic field rapidly heats up any pot or skillet containing iron, while touching the heating element with a hand or a bag of groceries does not generate melting heat.

First, you apply the heat locally, meaning that you only heat up the adhesive, not so much the adjacent materials or structure. This saves energy and makes handling the parts easier during assembly. And more importantly, this saves time setting the bond and cure.

Second, relative to fasteners, where the entire load is concentrated at the bolts, an adhesive bonded joint transfers the stress forces over the entire seam to reduce stress concentrations. 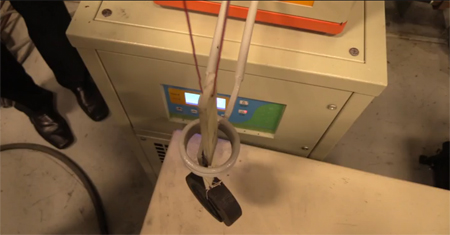 In short, this thermoplastic nano-particulate reversible-bonding process can offer almost the best of all worlds for automotive assembly. It lets us…

It almost sounds too good to be true…but really it’s just the power of plastics and chemistry! To learn more, click here.

View Part I: The Case for Reversible Bonding in Today’s Automotive Assembly