Moving Towards an All-Plastic Car Engine

Auto designers and manufacturers have been swapping traditional materials for plastic car parts for some time now, and the reasons for doing so are clear: plastic car parts are lightweight yet strong, and can help automakers boost MPGs as they strive to meet increasingly strict CAFE standards. However some car parts have been easier to replace with lightweight materials than others. Up until now, automakers have found innovative ways to use plastics for various car elements, including door panels, auto interiors, and even as the supporting frame of a vehicle – the chassis. Now, a new breakthrough in automotive lightweighting is upon us.

Solvay, an international plastic producer, has developed what they are calling the Polimotor 2 automotive engine using the company’s advanced specialty polymer technologies in lightweighting through metal replacement. Automotive engines typically are made entirely of metal and are the single heaviest part in a car. Polimotor 2 aims to develop an engine weighing 138-148 lbs (63-67 kgs), or about 90 lbs (41 kgs) less than today’s standard production engine. In Polimotor 2, Solvay will replace up to ten metal engine components – including the water pump, oil pump, water inlet/outlet, throttle body, fuel rail, cam sprockets and others – with parts made from high-performing thermoplastic materials. 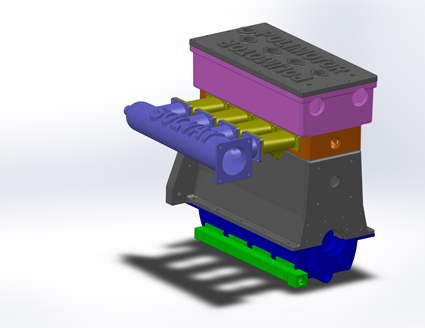 Polimotor 2 is the evolution of Polimotor 1. New polymers and technologies are introduced that were not commercially viable in the 1980s. The new Polimoter 2 is carbon fiber reinforced, while Polimotor 1 used fiberglass reinforcement. The Polimotor 2 four-cylinder, double-overhead CAM engine will ultimately be installed in a Norma M-20 concept car in 2016 for competitive racing at Lime Rock Park, Connecticut. Race cars today, general production tomorrow? Only time will tell! One thing that’s abundantly clear, however, is that moving towards an all-plastic car engine can help bring lightweighting and automotive energy efficiency to a whole new level, and will likely be a game changer for the entire industry. Great work, Solvay!