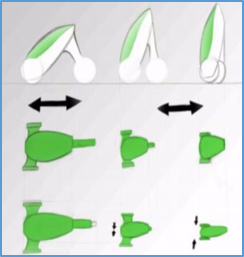 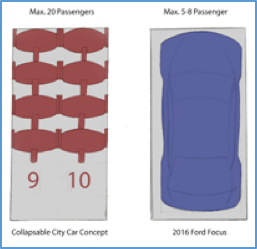 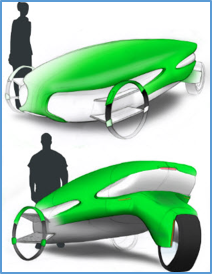 When designing a vehicle for Detroit in 2035, Zachary Rusack, (College for Creative Studies) had one lingering question. Should we change the city or change the vehicle to improve transportation? All too often, we react by changing a city’s infrastructure (widening roads, HOV, rail) to adjust to transportation and population needs. But, Rusack had a different, innovative idea.

The Automotive-Plastics.com-sponsored vehicle design course encouraged Rusack to develop a concept, which he presented at the Detroit Auto Show. Rusack created an autonomous vehicle that would meet the spatial needs of the city by using what he calls “Balloon Technology.” This is the ability to change the shape of the car. Imagine a world where ten cars fit into a single parking space. 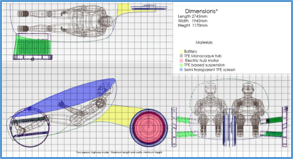 First, Rusack created a monocoque (one-piece) shell that included shape-changing electro-responsive steering connections made of shape-changing memory plastics. At the same time, the three-wheeled transport would be able to fold to a standing position, requiring less space than a traditional four-wheeled vehicle. The autonomous vehicle is designed to widen or change shape to take more passengers or cargo. For example, a second passenger compartment can be easily added by reversible bonding which could allow the consumer to adapt the pod-shaped transport with ease. 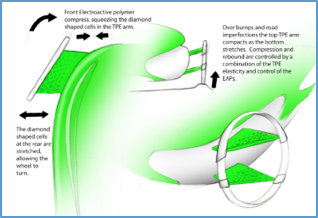 So how could this work? Rusack explains that his design takes advantage of the bendable and shapeable properties of lightweight plastics and elastomers. Hispresentation details how electro-active polymers compress the diamond shaped cells in the TPE or thermoplastic elastomer wheel arms, allowing them to turn in towards the body as the rear swing arm folds up from behind. Now this is not reality yet, but, this offers an exciting vision for the future of steering and parking!

The autonomous vehicle could be “summoned” by a driver’s phone, allowing you to text your ride to pick you up, instead of having to search for your car. Then the autonomous automobile would drive you home without touching the wheel, reducing traffic congestion and driver error.

Rusack noted that while we’re some ways away from seeing a car like this on the road, many of the materials and technologies necessary to make this vehicle are already under development and finding their way into the models of the future.

To see all of Rusack’s designs, as well as the designs of other CSS students, visit our Facebook photo album here.